Life Ahead For TFE731 As Honeywell Plans Upgrade At 50th Anniversary 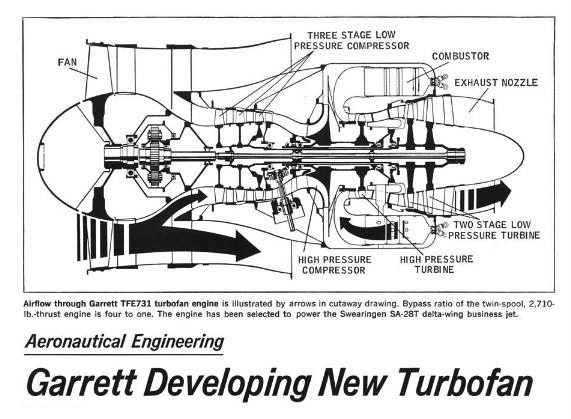 COLORADO SPRINGS—As it marks its 50th anniversary, Honeywell’s pioneering TFE731 business aviation engine line is set to be upgraded with a 21st century data monitoring connection capability to support the evergreen engine into the 2030s and beyond.

Originally announced in 1969 and first certified in 1972, the two-spool TFE731 was developed by Honeywell heritage company Garrett Corp. as a derivative of the TSCP700 auxiliary power unit designed for the McDonnell Douglas DC-10. Configured with a gear-driven front fan and a centrifugal high-pressure compressor, the TFE731 was the first turbofan purpose-designed for business aviation and has proved to be reliable and flexible, with more than 13,000 engines produced to date.

“We still have limited production of TFE731-60s to support Dassault for the Falcon 900LX. But what’s relevant is that there are 9,400 engines still in service” says Hans Laudon, vice president for engines at Honeywell.  Certified on 34 aircraft types and produced in 80 configurations, the engine powers a range of midsize business jets and advanced trainers and occupies a corporate aircraft niche that is still “very active and very vibrant,” he adds.

“[The TFE731] has also been the foundation of innovating our services model, so it really was the trendsetter of our Maintenance Service Plan [(MSP)]—or power-by-the-hour service model,” Laudon says. Covering most of the fleet, the MSP concept was extended two years ago to include a usage-based MSP incentive program that gives credit to TFE731 operators for using their engines less aggressively in ways that reduce fuel burn and extend operating life.

Engine data are analyzed by Honeywell’s predictive monitoring services to maximize engine utilization and availability and reduce maintenance costs. Under the plan, operators can earn up to 10% of their monthly service plan invoice amount, according to Laudon, who adds that the dollar credit can also be translated into a carbon offset.

Data to support the service are downloaded manually from the TFE731, which is configured with a digital electronic engine control. “On our modernized HTF7000 we have now implemented a wireless connected data transfer from the full-authority digital engine control to further enable engine assurance and health monitoring,” Laudon says. “We can do that wirelessly and we are going to be upgrading the TFE731s with the same data transfer module to allow operators to also do that more seamlessly.”

All TFE731-5, 20, 40 and 60 models are configured with the digital engine control and initial upgrades will be introduced starting next year, he adds.

From a decarbonization perspective Honeywell “feels confident that the TFE731 can be upgraded to operate on 100% SAF (sustainable aviation fuel)”—beyond the current 50% blend limit. “I’ll even venture to say that’s probably an easy upgrade, based on what we know,” says Laudon. “However, we’re sequentially placing our priorities on the HTF7000-powered super midsize jets because that’s where our stronger interest is from the customer base,” he adds.

For the future, Honeywell is even exploring potential new applications, including uncrewed air vehicles (UAV). “This engine is getting a lot of interest in what I’ll call adjacent market spaces,” Laudon says. “It has such a strong track record and there’s many, many, engines out there so we have a reliable deep foundation of all the parts and service that we provide. So, if you think about alternative UAV applications and the likes, we are getting some niche interest in the engine. So, let’s see where that might take us in the future.”

As for the expected extended life span of the TFE731 family on current business jets, Laudon remains optimistic. “These aircraft continue to be in the right spot and serve their purpose. It’ll be interesting to see, but I think clearly the next 10-15 years are looking solid,” he says.